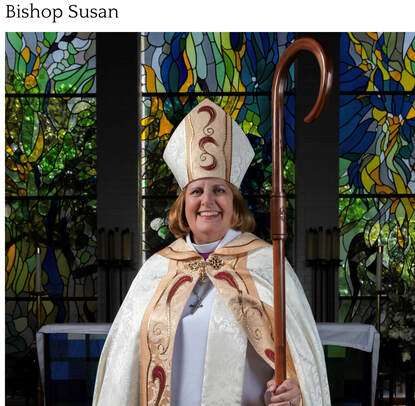 The Rt. Rev. Susan Brown Snook is a leader in the areas of evangelism, church growth, church planting, and new mission development. Before entering seminary, she worked as a certified public accountant, and as a director of Christian education and a director of lay ministries at an Episcopal church in Arizona.

In 2006, the bishop of Arizona called her to plant a church in the northern suburbs of Phoenix and Scottsdale. From 2006 to 2017, she served as the church planter, vicar, and then rector of the Episcopal Church of the Nativity, Scottsdale, leading it through a process of growth to a program-sized parish and through a building process that created a permanent home for the vibrant congregation.

Bishop Susan is passionate about evangelism – proclaiming the good news of Jesus – and about developing thriving churches that transform lives in their communities. She is also passionate about sharing God’s love with all God’s people through ministries of service and social justice, including supporting the full inclusion of LGBTQ people in the church.
​
Bishop Susan authored God Gave the Growth: Church Planting in the Episcopal Church and co-edited Acts to Action: The New Testament’s Guide to Evangelism and Mission. She co-founded the Acts 8 Movement, a group dedicated to proclaiming resurrection in the Episcopal Church. In 2018 Presiding Bishop Michael Curry appointed her to a six-year term on the board of Forward Movement.
Bishop Susan has been married for over 30 years to her husband, Tom Snook, and they have two grown daughters, Sarah and Julia.

Born and raised in Yuma, Arizona, Leland Bryant Jones attended University of the Pacific in Stockton, CA, graduating in 1969 with a Bachelor’s degree in History. He and Sheila Margaret Cornett were married on October 3, 1969 and had their first child, Jessica on August 31, 1970 and their second, Joshua, on November 14, 1972. During this period family growth, he attended Church Divinity School of the Pacific in Berkeley, CA., graduating in March 1973, with a Master’s of Divinity. Sheila was a voice major at both UOP’s Conservatory of Music and at the University of California in Berkeley.

Leland was ordained Deacon on April 1, 1973 in his home church, St. Paul’s, Yuma and began his clerical service as curate of Christ Church of the Ascension in Paradise Valley, where son Jeremiah was born on April 5,1974, one month before Deacon Jones’ priestly ordination on May 5.  In 1976 he was elected Rector of St. Stephen’s, Phoenix, where Johanna arrived on September 5. His first California service was in the Diocese of San Diego in 1980 as Rector of Good Shepherd Episcopal Church in Hemet, moving to the Diocese of Los Angeles and St. Andrew’s, Irvine in 1989.  Sheila attended Cal State, Fullerton, and achieved her Bachelor’s in Early Childhood Education in 1992 and her Teaching Credential the following year from Cal State, Long Beach. Fr. Leland served another congregation in the Diocese of San Diego, St. Mary’s, Ramona, from 2000 to 2008.

Retirement was hastened by the Witch Creek Wildfire of Oct. 2007 which burned Sheila and Leland’s Ramona home to the ground, immediately followed by his colon resection surgery five weeks later.

But retirement for Fr. Leland simply meant new and varied assignments; St. John's is the fourth parish that he has assisted as an interim since 2008, preceded by Grace, San Marcos; St. Andrew’s, Pacific Beach; Sts. Peter and Paul, El Centro (along with All Saints’, Brawley).

Beginning in March of 2011 as Interim Rector of St. John’s, Fallbrook, Fr. Leland was approached by the Bishop of San Diego in January, 2014 with an unusual request, to consider becoming the Rector of St. John’s.  The Vestry began to study this possibility in the first half of that year, offering the call to that position in late June.  It took the better part of the next six months to work out a Letter of Agreement that was acceptable to all, being made more challenging by his status as “retired” and drawing a pension from the Church Pension Group.

He has held a variety of diocesan offices, and a few national church posts, most recently as President of the Standing Committee of San Diego.  He is currently the Missioner for nine churches in Mission Area Five along the I-15 corridor of our Diocese.

He and spouse Sheila enjoy their four grown children, all of whom live and work in San Diego County. Three grandchildren enliven their existence, as does Sheila’s work as a Kindergarten teacher for the Irvine Unified School District, where she is nearing 20 years of service at the same school. He enjoys golf, woodworking, walking, magic, reading, cooking, antiques and travel (all but the first two with Sheila).
Vestry Members:
CLASS OF 2023:
Sydney E. – Education (Youth) / Service: Luau
Kim K. – Evangelism: Communications
Marti V.H. – Parish Life: Events / Evangelism: Newcomers